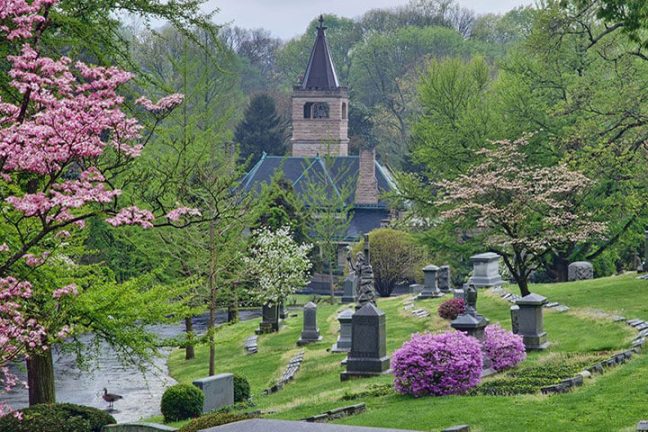 “Just follow the yellow line—it will take you right to it.” This was a common thing to hear at Cave Hill Cemetery in Louisville, Kentucky. People had asked so many times that the cemetery ﬁnally just painted a line on the road to take you to there. The place in question was the grave of Colonel Harlan Sanders, the founder and symbolic presence of Kentucky Fried Chicken. Visitors from around the world come to see his grave. The yellow line stops in front of a memorial that has a large bust of Sanders amid marble columns.

Cave Hill has a lot of memorials that get attention. There is “Mr. Magic,” whose real name was Harry Collins, who for decades represented the Frito-Lay corporation. He has a full-size bronze statue that is holding up his hand as if he had just performed a trick. You can also see the Satterwhite Memorial, which includes its own Greek temple complete with a statue of Venus. It is impressive enough to make you pinch yourself and remember where you actually are. In comparison, arguably the most famous person interred at Cave Hill has a relatively simple monument. A square stone monolith stands next to a state historical marker to point visitors to the final resting place of explorer George Rogers Clark.

Cave Hill is nearly three hundred acres of memorials. It has been in use since 1848 and is on the National Register of Historic Places. There are crypts and mausolea that have been built. There are all manner of stones and statues. There are sections for those who died on both sides of the Civil War. It is an impressive collection of memories guarded by gates and fences and trees that have seen humans come and go for generations. This incredible array of cemetery architecture stretches the soul in terms of what it is ‘to be remembered.’

I’m sure that mom visited Cave Hill when we were living in Louisville. Mom loved to go to cemeteries. As a genealogist, she was always searching for the markers and memorials of those who had come before. She would take pictures and notes about those who were further up the family tree as it were. She would make etchings of stones that had been engraved with the names and dates of the deceased. These were like gold to her. To ﬁnd these touchpoints with her ancestors put her in a frame of mind like that of a discoverer who had come upon the most marvelous ﬁnd. Tombstones were a treasure-hunt for her, and walking among the markers a delight.

So there is a great irony here. The one who sought out stones and marked the memorials of others is not likely to have one herself. Since she will be scattered rather than interred, since she will be somewhere out in the open, there will not be some stone to mark her place. The dates of her birth and death will not be etched in granite or cast in bronze. No epitaph will evoke her spirit. There will be no spot to take and leave ﬂowers. There will be no bench on which to sit and pray or ‘converse’ to whatever extent people do such things. The very thing that she enjoyed so much will not be aﬀorded to those who come after her.

I know that some folks are going to read that and be upset. There are those who believe that without a marker we forget more quickly. Somehow what is ‘written in stone’ will not fade from our minds. We hear tales of those who visit the graves of their beloved all the time. They bring ﬂowers and say prayers. They cry and remember moments with the departed. Maybe they oﬀer apologies or ask forgiveness. Perhaps they do their own form of penance. There is something about having a place and having a tangible memorial that may be therapeutic for those who are left behind. Many cannot conceive of not having such a marker. The lack of a marker would mean that their loved one is gone.

A friend recently told me the story of visiting an old church in England. It too had a cemetery. It had been in use not for decades but for centuries. Over the course of time, the size constraints had forced them to reuse some of their cherished, but limited, ground space. She and a friend sat on a wall to take it all in. It took a little bit before they realized that the wall on which they sat was actually made of older stones that had been removed as new people had been interred. Worn from the stone—the names, the dates, the memories—all gone.

Yes, gone. Whoever it is really is gone. That’s part of the point. There comes a moment when we leave this world. The life that we have had and hopefully enjoyed is over. Our ﬁnite selves are swallowed up in the endless march of time. We take our place among the memories of those who carry on. It is universal. It is inevitable. Having a marker matters not!

Few of us in this life are going to alter the world so radically that we warrant such memorials. Colonel Sanders cooked chickens and built a business that reaches around the world still today. George Rogers Clark explored vast territories and opened our eyes to vistas that others would never see. There are historic individuals who will be remembered for what they did, whether we put up a marker or not. There will be statues carved and stones engraved and plaques cast for these.

One thought on “Fitting Memorials”