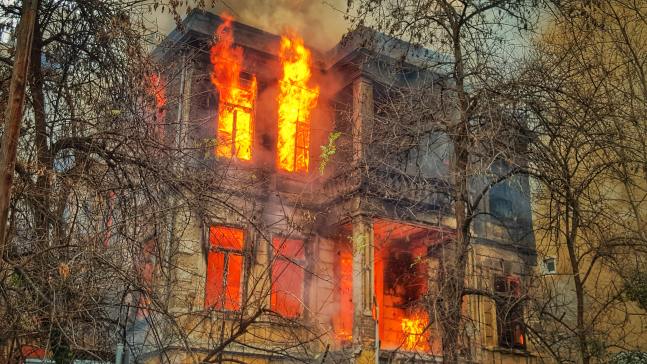 Grace to you and peace. This is another installment in my Epistles from the Epidemic series. I’d like to begin with a modern parable:

There was a man who inherited a house. It was a lovely place with many ﬁne details and appointments. It had a unique feel to it. It was large and commodious. But it was also expensive to maintain and required a good bit of attention, not to mention expense.

After some time there was a smoke detector that started beeping. There was no sign of smoke or ﬁre at the time. But it was annoying. So the man took the detector down and decided not to replace the batteries. After all he thought batteries cost money, and he had more than enough other items that also required attention. Not having that detector would surely not be a big deal. And all was quiet once again. He went about life as ‘normal.’

But one day a ﬁre started. It started in a remote corner of the house close to where the detector had been disabled. it was not the bright, ﬂashing kind of ﬁre either. It was more of a smoldering. Oﬀ to the side. Out of sight. Eventually the ﬁre grew in intensity and ﬁnally set oﬀ other alarms that had not been disabled. By this time there was a great conﬂagration. All the alarms were blaring. The smoke and ﬂames could be seen clearly. The ﬁre department had to be called; they came with sirens that could not be ignored. The man stood on the lawn thinking to himself, “who would have ever thought the house could have caught ﬁre?”

We ﬁnd ourselves in the midst of a crisis. An illness is spreading among us, and it is spreading rapidly. The numbers are staggering. The numbness we feel is stunning. How could this have happened? Why were we so ill-prepared for this illness among us?

At least part of our lack of preparation was that alarm systems that had been in place were disabled or discounted by those who should have been monitoring the situation closely. People who were tasked to keep track were released. Those who had expertise were considered expendable. The notion that we could quickly and eﬃciently reassemble a task force to deal with such an issue was misguided. By the time we knew the team was needed the crisis was well underway. By the time we needed expeditious movement on the ground we were still trying to ﬁgure out who was going to do what. We started addressing the situation when it had already taken hold in ways that we did not grasp.

At least part of our lack of preparation was the lack of understanding the devastating eﬀects that this pandemic would yield. We had all been warned for years that such an event was not only a possibility, but a probability. In fact, many warned that there was a very high probability that it would occur. For at least 15 years the alarm has been beeping away in the works of epidemiologists, but the sound was drowned out by the din of commerce and comfort. So much easier to ignore the beeping in the house, if we’re outside taking our leisure.

At least part of our lack of preparation was the slow acknowledgement of what was going on. It took some time before the alarms were clearly heard and action taken. We spent some time trying to dismiss the alarm as if it must have been something else that was happening. We were told that it was not a real peril but a matter of politics. We were told that it would just disappear and we would not have to worry about it. There is always a time for diagnosis, and sometimes diagnosis does take time and tests and thought. But ignoring or dismissing the symptoms does not help anyone towards healing.

At least part of our lack of preparation was keeping track of what kinds of supplies would be needed. We live in a ‘just in time delivery’ model of business. One need not order too much ahead of time; warehouses cost money and space. So we have created a culture that relies on speedy shipping of anything that we need. We expect that Amazon has it sitting there just waiting for us to click the mouse. It can all be here overnight, or at least in a couple of days. We were not ready for the stoppages that occurred in the supply lines. With China shut down many other businesses would soon feel the eﬀects of the virus and the lockdowns that followed. “Just in time delivery” has lulled us into thinking that it can always produce. Supplies have to be invented and created and manufactured and shipped and stored and distributed—all of that takes time. Time in a crisis is an incredibly precious commodity and deﬁnitely not a luxury.

At least part of our lack of preparation is that none of us had ever had to live through this kind of crisis before. The fear of the unknown sparked a panic. People cleared out shelves of toilet paper. Sanitizer basically evaporated. People grabbed and bought and hoarded all manner of supplies and food because they were afraid. This reaction led to more panic and shortages. All of us were perhaps not prepared for the eventuality of having to shelter in place for weeks at a time. We were little prepared for what is now appearing to be a major emergency of historical proportions.

At least part of lack of preparation is that we do not value many of those who are ‘essential.’ We have permitted a system in which some of the most important tasks have received the least recognition and compensation. Life looks a lot diﬀerent when the folks who keep it all ‘normal’ are not present to do so.

Yes, I write this with a critical eye to those who have had a hand in creating this crisis. I have often told people that when you have a really big mess, then you had numerous people who played a part in making it. That is true here as well. Let’s be clear—viruses do not care about country or party or race or religion or education or any of those things with which we occupy ourselves; viruses are a part of the natural order and work according to the laws of biology and chemistry and physics. A virus cannot distinguish between one person or another. A virus is a particle that is looking for a place to attach itself and replicate. In a very real sense the virus is not the crisis.

But how we respond to such things does present us with a crisis. How we respond is part of what makes us human. We have brains and knowledge and reason at our disposal; we have to address such situations with all the science we can employ. We have empathy and sympathy and compassion; we have to do what we can to oﬀer support and strength to others. We have prayer and faith and hope; we need to be exercising these to the fullest extent possible. The crisis reveals our character; the mess tests our mettle. We may not have been prepared, but we are now in the midst of the situation and we have to respond at our best.

On a personal note, yes, I too was ill-prepared for this crisis. It struck me when I was looking at empty shelves in the stores and empty seats in the sanctuary. For a moment I had that sense of dread that seems so pervasive right now. What would I do? Do I have enough? Will we get through this? I take a deep breath. We cannot change our lack of preparation— that is behind us! But we can learn from it, and we must if we are to get each other through this.

Be safe. Be healthy. Be good to one another.
Blessings,
Les

One thought on “Ill-Prepared”