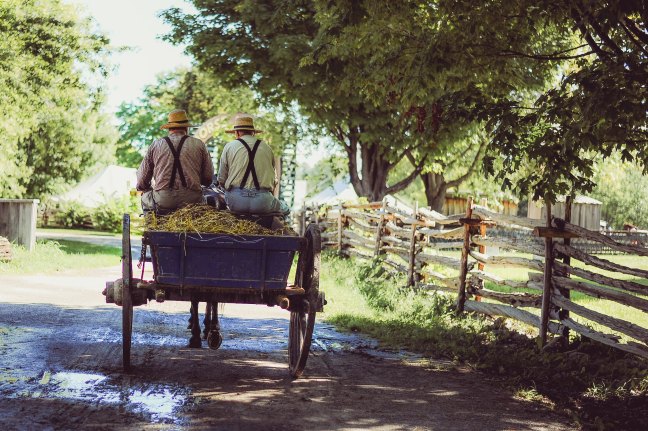 I recently saw a story online that caught my interest. Someone was out in Amish country and came upon an elderly gentleman. There is more curiosity about the Simple People than answers for most of us. The Amish are not usually quick to engage in public conversation about matters of faith or politics, and their beliefs are not well-known outside their own circles. They are portrayed in various ways by writers and media, but the truth is most of us don’t know much about them. So the visitor asked a simple question, trying to learn more about Amish beliefs. The question was “Are you a Christian?”

But the Amish gentleman knew better than to get into debates about doctrine or discussions of history of religions. I can easily imagine him looking his visitor up and down and sizing up the request. We all know that sometimes questions come with more behind them. His answer was straight-forward: “You’ll have to ask my neighbor.”

In essence, he was saying that the crux of his identity is not perhaps what he thought of himself but what others see in him. His own views were of less importance than how he was viewed by others. He would not take the title to himself—it would have to be granted by those who had to live with him.

His answer shows a degree of humility that is often missing in our conversations. People are often quick to point out their associations as a means of making themselves look good. Name-dropping a certain school or club or church seems to carry some sway in the world. We tend to claim privilege by our connection to special institutions or people. There has never been a shortage of hubris in the world, and many add to that supply daily. This man was unwilling to do so.

His answer shows a degree of social consciousness that is missing as well. We have a steady stream of those willing to claim the superiority of their own views. This mindset tends to believe that if others would just adopt ‘my position,’ then everything would be right. People are viewed as adversaries that have to be persuaded towards one’s own side, or worse yet, as enemies that should be persecuted and punished if they do not change. This man’s answer was keenly aware that others have their own experiences and views that matter—his answer would not be the ﬁnal word.

His answer says that those who would claim the title of ‘Christian’ must be living in such a way that their neighbors can see something of the love and compassion of Jesus in them. It is in the relationship with others that we get the clearest glimpse of what is actually within someone’s character. Jesus was quick to talk and eat with ‘sinners.’ The ‘least of these’ found a place of welcome and dignity in his presence. He was gracious and patient in his words with those in need. He was forgiving of those caught in their faults. It was how he spoke and related to others which displayed the depth of his character, such that others saw in him the very presence of God.

I am reminded that our identity is seen most clearly in our relationships. We are not individual egos walking around who get to claim things for ourselves. We are people who are living together in community on this planet. What our ‘neighbors’ say and think and feel is important. What is going on within the community is more critical than just what might be going on in one’s head.

Yes, I found wisdom in his answer. Giving a self-referring statement of his personal doctrines and beliefs would probably have meant that the visitor would go away thinking he now understood what the Amish were all about. By not going in that direction, the man points to continued conversation and connection about behaviors as well as beliefs.

If you ask me who I am, I could tell you all kinds of things—my education, my work experience, my activities, my profession, my preferences—and you would know something about me. But if you ask me and I refer you to my neighbors, then the picture is much more complete and revealing.