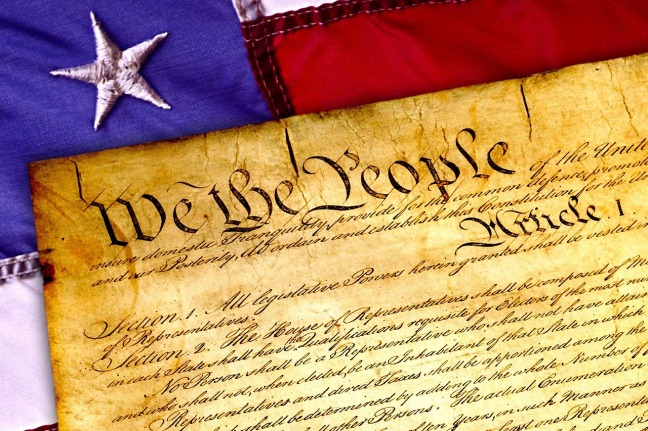 We the People… Those words have been repeated and recited and remembered for decades. The Constitution of the United States is one of the great documents in not only our history, but in world history. In a time of revolutionary change, the people of this developing country committed its governance and direction to the people who formed it. No longer kings or monarchs or an aristocracy or an oligarchy, but government by the governed. It was a radical idea and it yielded a radical document that has stood the test of time. We continually hearken back to those words and that foundation. In the midst of troubles and trials and tribulations, we have looked back and remembered that we claimed for ourselves the prerogatives that come with this phrase. It is our rights and privileges and responsibilities that are on the line every time we encounter these words.

But we also need to be honest with ourselves. When this was written “We the people” did not actually include all people. There were whole groups of people who lived here but were not included. We have had to redefine “we” many times in the course of our history. That’s a valuable lesson for us today, in a time when there is great division and debate about who we are and what we are doing.

“We the people…” did not include Native Americans who had lived on this land for eons before the flood of people who came from Europe. Those who had created cultures and art and civilizations were constantly driven farther and farther from their ancestral homes. Treaty after treaty was broken. Those who were native were pushed away, discounted, denigrated, and despised. Those who were native were not allowed to vote. They were put on reservations, which was a nice way of saying internment camps for people different from the majority of euro-centric ‘settlers.’ Our mistreatment of the native people is a shameful portion of our history that is typically recast as an ‘us versus them’ story in which our faith, but more importantly, our firepower, was superior. Either they could become like ‘us’ or they could stay socked away on their little piece of ‘reservation’ which we had decided they could have.

“We the people… “ did not include slaves of African descent. The slave trade brought hundreds of thousands of Africans to this country, where they were bought, sold, and treated as property. They served at the mercy of their masters whose mistreatment cannot fully be described. It was on their backs that the economy of the rural South was built. It was on their backs that the toil and labor of countless hours was burdened. The history of racism in this ‘land of equality’ is something with which we still struggle. We fought one another over this issue. Brother against brother, family against family, a land torn asunder in which ‘we’ was not present. ‘We’ have still not recovered from the dynamics of division that came about in that time. ‘We’ have still not fully reconstructed the nation that was before. ‘We’ still have a long way to go to heal the hurt that happened in that part of our history.

“We the people…” did not include women who were denied the right to vote. It would take generations of women suffragists protesting and working for equality to bring the vote about. The passage of the 19th Amendment would not happen until 1920. For generations those voices were silenced and unheard. It would take longer still before women could act independently in matters of finance and property ownership. The truth is that women still do not earn an equivalent salary/wage in our economy for the same work done by male counterparts. “We” may now include women in ways that were once denied, but “we” have still not achieved “liberty and justice for all” in this regard.

“We the people…” did not seem to include the immigrants that would come later to these shores. Certain ethnic groups were denied full status. Those who got here earlier tended to repress those who now asked to be part of the “people.” The Irish and Italians who immigrated were often limited to living in restricted neighborhoods. Asians who came to our shores were looked down upon. Latinx who came from Mexico, Central, and South America have often had to struggle whether they were ‘legal’ or not. Vietnamese refugees who came experienced similar treatment. We have a hard time including the ethnic diversity that has come to our shores, even though that was what we were called to do.

It is also good to remember it is “We the people…” It is not we the privileged, as if they alone govern the whole. It is not we the parcels, as if land ownership was required for participation. It is certainly not we the politicians, as if those who are currently holding office should be given power that was and is not always accountable to the governed. The framers knew all of those possibilities and addressed them.

“We the people…” is a hard phrase to honor fully because “we” have typically defined ourselves in an “us versus them” proposition. In our current context we may believe that the founders could certainly not have included “them” as part of “us.” “We” tend to self-identify as part of a group that is always smaller than the whole; it is those who look like us, talk like us, share the same socio-economic status, share the same education, the same taste in cultural options, the same sexual preferences. Our notions of “We” are almost always too small and narrow. We can look back and point that out even to those brilliant founders who were striving for a more inclusive view of the political realm and were working mightily to achieve it (even with their missing pieces).

My own understanding of ‘We the people’ has changed over the course of time. I have spent time in Alaska with Native people who know what life on the ‘rez’ looks and feels like; some have become dear friends, and I appreciate their culture and perspectives. I have spent time and worked with African Americans who are trying to solve the situations that have limited their opportunities. I have heard the lived-stories of folks who were in Birmingham during the Civil Rights Movement. I have encountered many women whose leadership and capabilities are both amazing and admirable. It is beyond me how ‘we’ could have thought for so long that these strong women should not have been heard and empowered.

Much of my growth has come about through an understanding of the gospel of Jesus Christ who welcomed all people to follow him. Jesus was founding an open community of people all created in the image of God—all beautiful and gifted and redeemed through his ministry. Those who struggled with Jesus were the ones who thought they had already solved the ‘problem’ of ‘us versus them.’ Jesus himself never seemed to have an issue with ‘we.’

“We the people…” is an ever-changing group that has expanded in all directions through the course of history. It now includes people from all continents and cultures, all nations and races. “We” is even bigger than the framers conceived. “We” will always be bigger than any one of us can imagine.